It started off like most Wednesdays with coffee, breakfast and as of late the drone of some newscaster telling me that we do not yet have a President, but we do have some type of new law suit, court ruling or way to recount the ballots. Since this is the day before Thanksgiving, there is an anticipation in the air of things to come. Our daughter, Sarah has come down for college break from a cold and soon to be snowy section of New York. Our good friends, Gael & Chaz Cone have arrived from Atlanta for the festivities.

It is also the day that I have planned to drive over to Sebring Race track and see the C5R run. The rumor mill has been saying that the new car is fast and that there is a chance that the new drivers, Dale Earnhardt and Dale Jr, for the 24 Hours at Daytona will be there for the testing. The C5 net has informed me that the test is closed to the public, but through my friend Rick Baldick, Brand Manager for Corvette, I am hoping that I will be able to get in. Chaz & I get in my yellow Z06 and head toward the track, neither one saying how exciting this is or how much of a waste of time this may turn out to be. Oh well, at least it is a beautiful day for a ride, and these roads are fun to drive. 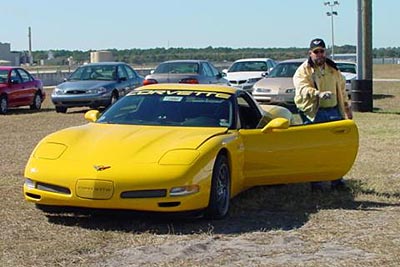 After about an hour and a half, we arrive in Sebring and proceed to the track. Not without seeing our share of policemen, Florida drivers and some kid in a rather good sounding truck about three feet off the ground and who wants desperately to drag race us down the main highway. We resisted the temptation and I tried to remember the way to the track. Lo and behold we didn’t do too badly and were at the gate and ready to talk to the guard. There was no one else around and the one open gate looked lonely. We drove up, told him my name and were told to sign the liability waver and proceed to the right and over the bridge to the infield. We had made it this far.

While crossing the bridge, we heard the unmistakable roar of the C5R and proceeded into the infield where we saw a Goodyear trailer full of tires, 2 Corvette Racing trailers, and a very few cars parked around. I could not believe there was hardly anyone in the area. Both of the big Corvette transporters were here so we expected to see four cars; we weren't disappointed. The Le Mans #63 and #64 cars were here as well as the American Le Mans Series #3 and #4 cars. We parked the car and headed toward the pit area where we had heard the cars. 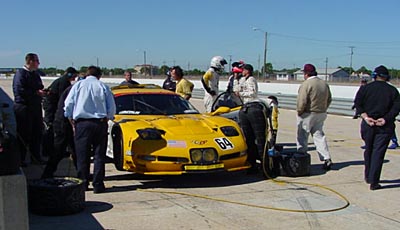 Upon arrival we saw a few pit crew and some transmission people and heard a thunderous roar coming down the front straight. There was the number 4 car going like the hammers of hell! 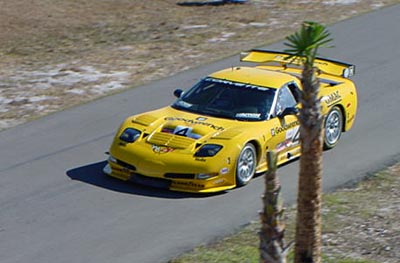 Both Chaz and I looked around to see who we could recognize, and saw driver Kelly Collins and another driver in a blue racing suit (turned out to be a young driver named Paul Edwards). However, there did not seem to be anyone else around. I remembered that it had been a long ride down and the rest rooms were on the other side of the Corvette trailer, so off we went. We cut across the grass and walked around the trailer, only to find a couple of tables set up for lunch and there was another driver, Andy Pilgrim sitting down with another person. 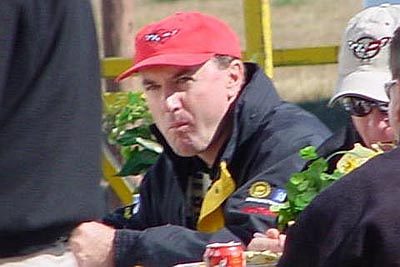 I know Andy so I went over and shook his hand and said "Hello." It was then that I realized that the other person was... 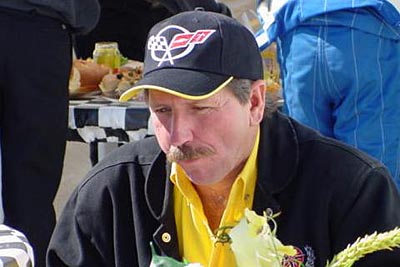 ...Dale Earnhardt himself! I mustered up some courage and said "Hello Sir. I'm Buzz Nielsen and it is a pleasure to meet you." He returned my greeting and went back to his sandwich. I also realized that the young man at the other table was his son.. 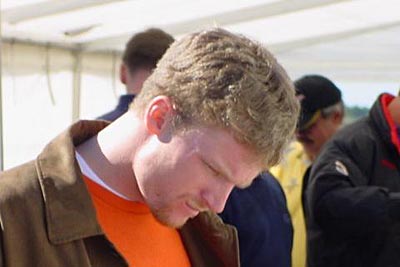 Both Chaz and I realized that the others were involved with racing conversation and would probably not want to hear from us, so we moved away and tried to take a few pictures from afar. I was determined to get their autographs on my hat brim, so I just walked back and asked Dale if he would sign my hat which he did willingly. I thought to myself what the hell, maybe he will sign my hood, so I asked again and he said that he wanted to go get another sandwich. Oh well at least I tried. Dale, Jr. stood up and headed toward us, so I asked him to sign the hat and after that mentioned the hood of my car. He said maybe and went off to his business. Chaz said to me that it would probably be smarter to bring the car closer, so that I would have a chance to get my goal achieved.

Sure enough, Dale Jr returned, took my pen and signed the hood alongside the other drivers and Corvette people already there. 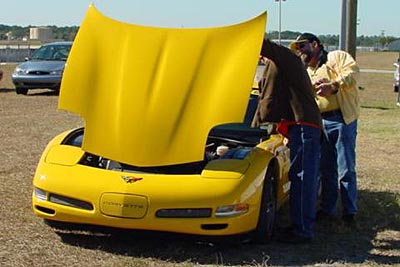 I asked him if he could ask his dad to sign and he told me that it would be my job to ask and not him. I then saw Dale moving toward the car and walked up and asked again. I was rewarded for my actions and he also signed. 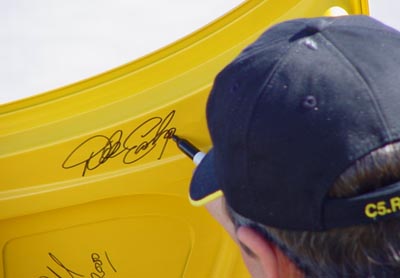 Well, that could have been the end of my day and this story would have a very happy ending. However, I looked around and there were quite a few people looking at my car inside and out. One of them was Ken Brown, who was dressed in Corvette Racing attire and asked me how I liked the Z06. I told him I loved it and he asked if he could take it for a ride. I wasn’t sure what to say, but figured what the heck and said "OK." He got in, told me to get in with him and we turned around and headed back toward the bridge, and I had no idea where we were going. Then he proceed to drive by the pits and onto the track. This was too good to be real. I was going to sit in the passenger seat for a ride around the track at Sebring! 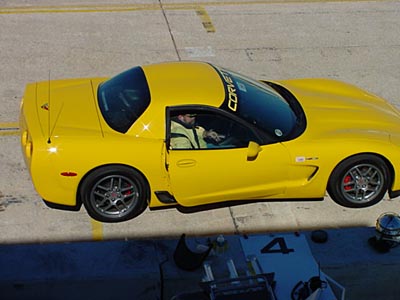 Well, he did know how to drive and was telling me the various ways to go into each of the corners and how much throttle to use on the straight-aways. After going almost all the way around, we were coming along the back straight and I see this rental car on the track, and looked inside and here are both Earnhardts and two other people apparently headed for the airport to leave town. We waved as we went blasting by, and Ken asked if I would mind going around again a little faster. The next lap was much better than before, and my adrenaline was racing. As we pulled onto pit road, Ken asked if I would like to drive a lap. This was a real tough decision ..... yeah, RIGHT! We traded places and off I went, hoping that I could remember a few of the tricks he told me. 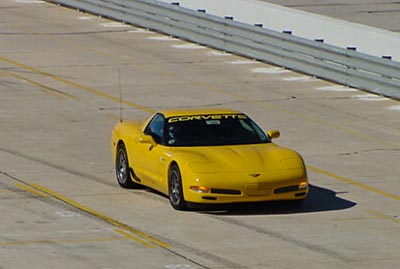 I was really pumped by now and figured that I could tackle this track just like the big guys. Thankfully Ken was along, since there were a few times when he had to remind me that there was a turn coming up and that at the speed we were going, they would be needing the rescue crew to greet us. I did however do fairly well on most of the course and managed to get up to about 145MPH on the back-straight. I also abided by the 37MPH speed limit on pit road. As we pulled behind the wall and toward the trailer, I was on cloud nine plus.

After this ride, I parked the car, smelled the tires and brakes and said to myself what a day! We then walked over to the other drivers, who were talking to each other and figured that the testing was over and we would head home. As we were talking, we looked up in the sky and here comes this twin engine plane making a beeline toward us. It seemed to be flying about an inch or two above the power lines and bearing down on our little band. All of a sudden someone says "We're being buzzed by Dale. He said we would be talking about him after he left and this is what he meant." Well, they may not be talking, but I sure am to anyone that will listen!

They were going to do some more testing, so we stayed for an hour or so before jumping in the car and heading home. 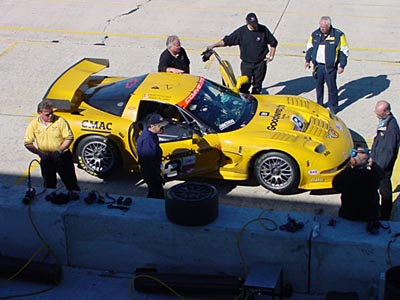 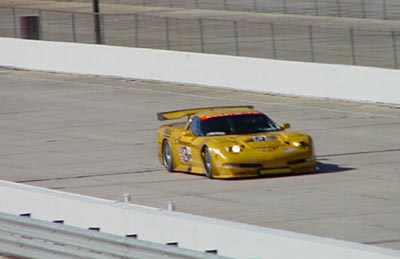 This is a Wednesday I will not soon forget! 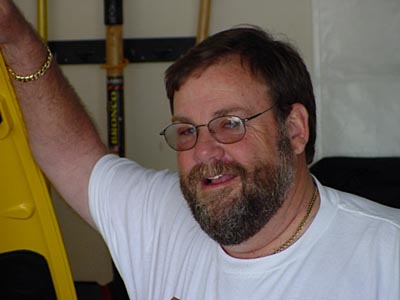