BY: Bob Kroupa of Vette-N-Vestments 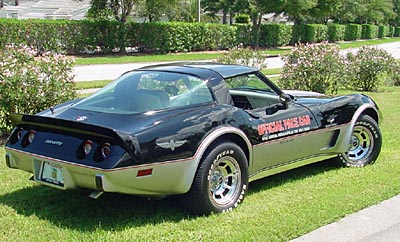 The year 1978 was a special year for the Corvette: the marquee’s 25th year anniversary. No one knew what was in store for this special anniversary year, especially from a pricing perspective. As it turned out, prices would skyrocket beyond belief for the special Limited Edition Pace Car. However, let’s back track to 1977 for the complete details.

During the late summer of 1977, the word “on the street” was that the Chevrolet Motor Division was given the honor of pacing the Indianapolis 500 race with a Corvette. A special model was to be manufactured, the Limited Edition Corvette Pace Car, in March of 1978 with each Chevrolet dealer being allocated only one Pace Car.

The Pace Car was a limited edition Corvette that included a special serial number for model identification. It was a full option Corvette with black and silver paint, polished aluminum wheels with a red stripe, mirrored glass T-Tops, and a new seat treatment that would not become standard until the 1979 model. An Indianapolis 500 decal kit was included with each model, since this car was designated as the Official Pace Car of the race in 1978.

Early buyers were at their Chevrolet dealers before many of the dealers even knew about the special Pace Car’s pricing or allocation. A few lucky buyers were able to buy below the base list price of $13,653 however, the majority of buyers paid list price or offered to pay a premium for the dealer to write an order for this special Corvette.

The approximate delivery sticker price on the majority of the Pace Cars was $13,800 for the L-48 and $14,300 for the L-82. As the production date neared, word spread that this could become a very collectible Corvette given that each dealer would only be allocated one Pace Car. The final production number reached 6,502.

The Wall Street Journal ran a front-page story on March 27, 1978, reporting the collectible stories of this special Limited Edition Pace Car. At that time, prices went wild – with asking prices frequently in the $20-25,000 range for the L-48 and L-82 automatics, with the L-82 4-speed commanding up to $40,000. Stories and pictures began to appear everywhere; we even recall seeing a Pace Car in a dealer’s showroom with an armored guard watching over this Special Limited Edition!

The market appeared to peak on Memorial Day, the day of the big race at Indy. At that time, the average asking price was well into the $20,000 range. We have noted modest depreciation from the inflated price points reached during the introduction period of the Pace Car. Today, the average price of a 1978 Pace Car is $17,600, which reflects no change from the 2001 pricing. However, many of these Limited Edition Pace Cars are available for sale with little or no miles on them, which make them special buys. It is interesting to note that today’s average prices exceed the window sticker price in 1978!

Today, the Pace Cars with limited mileage continue to bring top dollar. A L-82, 4-speed Pace Car with less than 100 miles was recently sold for $31,000. Another Pace Car with the L-48 motor and automatic transmission with only 4 miles sold at the “low price” of $20,750 at Bloomington Gold last year.

For those who didn’t partake in the Pace Car phenomenon, there was another opportunity to own a special Corvette in 1978. A special two-tone silver anniversary paint option was offered at $399. The last time a special paint had been offered was in 1963, and it too, was silver – Sebring Silver – for an option price of $80.

Of the 40,000+ non-Pace Car Corvettes manufactured in 1978, approximately 15,000 buyers selected the Silver Anniversary paint option. This was a wise investment and is reflected in today’s average market price of $9,500 (a 3% increase from last year), compared to the non-anniversary paint edition that is priced at an average of $7,100.

We expect the interest in these special editions to remain high during the next 18 months, considering another Pace Car is in production and we are approaching the 50th Anniversary of America’s Sport Car icon – THE CORVETTE.